Hustle Gang‘s T.I. has stepped forward to add a little extra drama to the divorce filing situation. The “King of the South” has finally spoken out since the legal split coverage went viral. 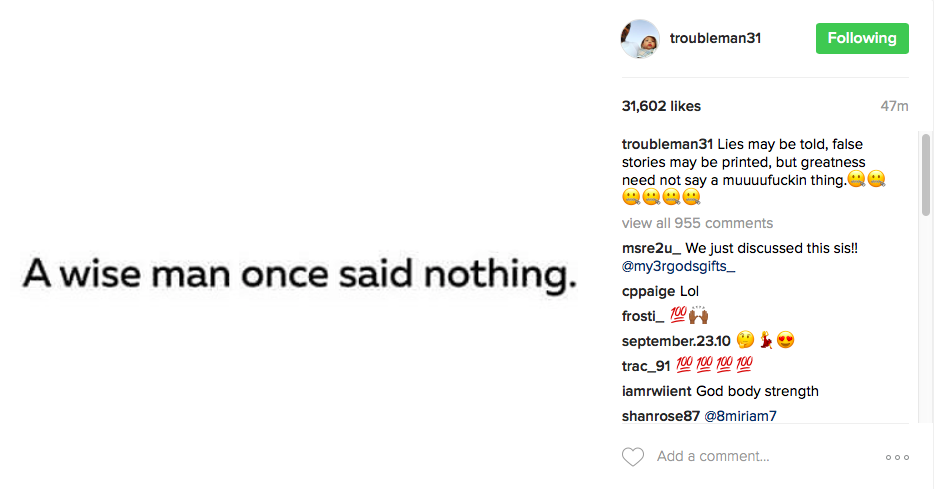 Hours prior, buzz developed about Tip possibly trying to end the divorce proceedings.

Sources close to T.I. tell TMZ he thinks Tiny has overreacted because they’ve always gotten through rough patches in their 15-year relationship. He waited a few weeks so she could cool down after filing divorce docs, but now he’s trying talk “sense” into her … that they’re good together. T.I. believes Tiny was pushed by “jealous friends” into filing to end their marriage. The 800 pound elephant in the room that’s not being addressed … Floyd Mayweather. (TMZ)

There’s still hope for T.I. and Tiny … because we’re told they’re still very much on talking terms despite the divorce … and there are major signs they could call the whole divorce thing off. TMZ has learned … after Tiny filed for divorce Dec. 7, the two have gotten together in person at least twice and sources very close to the couple tell us “things got romantic.” We’re told there are still major issues with the relationship — the word that keeps being thrown around on both sides is “trust.” (TMZ)

A few hours prior, details surfaced about what Tiny hoped to gain from the divorce.

As expected, Tiny is seeking to protect herself financially. In the docs, it is noted that there is marital debt and that due to the high earning ability of T.I., he should be responsible for ALL the debt. She reserves the right to allege and plead additional grounds should a settlement NOT be reached and the EVIDENCE warrant pleading additional grounds after engaging in full discovery. In short, Tiny is requesting temporary, permanent legal and physical custody of their minor children. She also wants temporary and permanent child support and alimony and an equitable interest in any and all real and/or personal property acquired during the marriage. (theJasmineBRAND)

Dwayne Johnson Surprises His Dad With a Car for Christmas