G-Unit‘s 50 Cent has the power in his hands to take over the movie biz. The rapper-turned-Hollywood stud has teased fans about an upcoming film called Den of Thieves.

Fif went to Instagram Friday (December 30) with a shot of himself and co-star Gerard Butler. 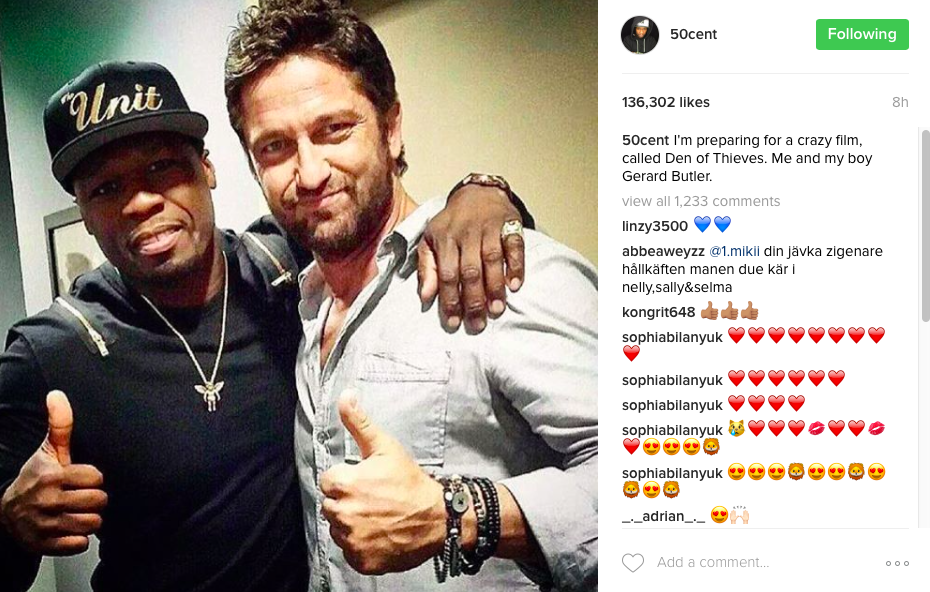 Back in mid-December, buzz developed about Fif’s latest upcoming flick.

EXCLUSIVE: Curtis ’50 Cent’ Jackson has just been cast in STX Entertainment’s upcoming crime thriller Den of Thieves which is being directed by Christian Gudegast from an original screenplay that he co-wrote with Paul Sheuring. The project, which has also long starred Gerard Butler, is being produced by Tucker Tooley and Mark Canton as well as Butler and Alan Siegel from G-BASE, Butler’s production company. It has been described as “a Los Angeles crime saga in the vein of Heat and is scheduled to begin production in Atlanta, Georgia on Jan. 30th. (Deadline)

Recently, Fif hinted at a possible retirement following the release of his upcoming Street King Immortal.

“I want to finish with that project. I don’t want to write another record after that. You know how some artists got to have confirmation that they’re right. I have that confirmation in f**king 35, 40 million [albums] that I already sold.” (Muscle & Fitness)

Earlier this year, the rap superstar said he believed he could out-make his past hits.

Inside Peta Murgatroyd and Maksim Chmerkovskiy's Last Days Before Baby, Plus the Adorable Story Behind the Nursery